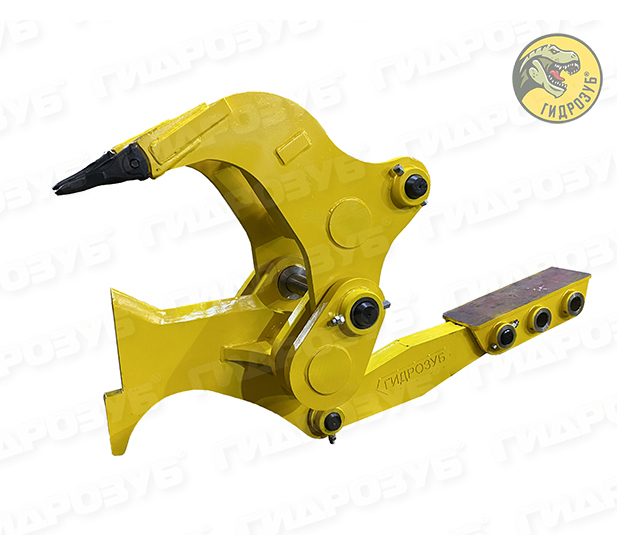 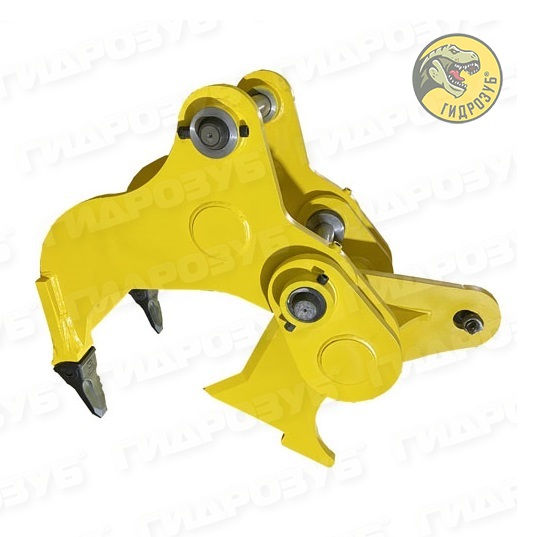 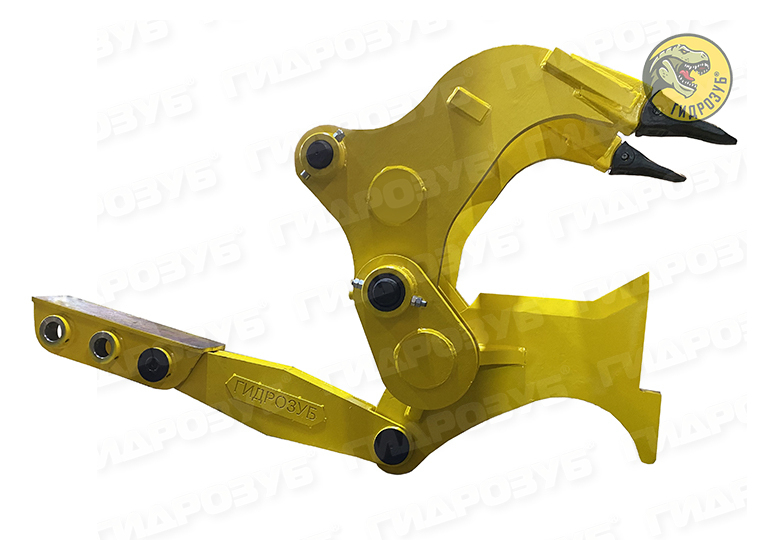 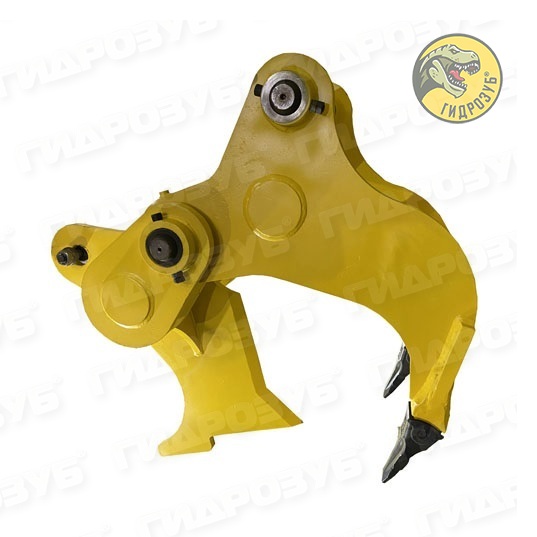 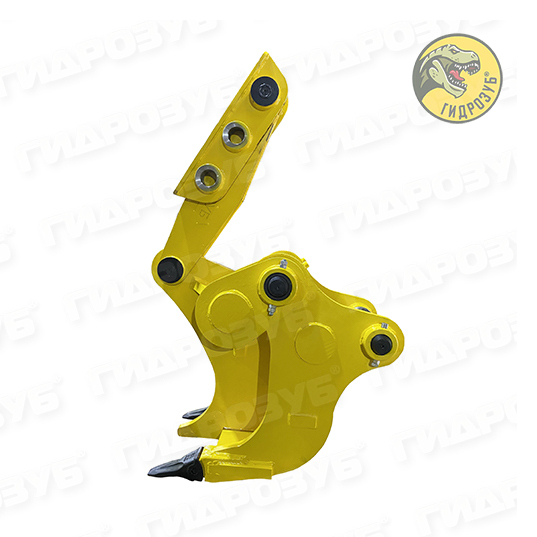 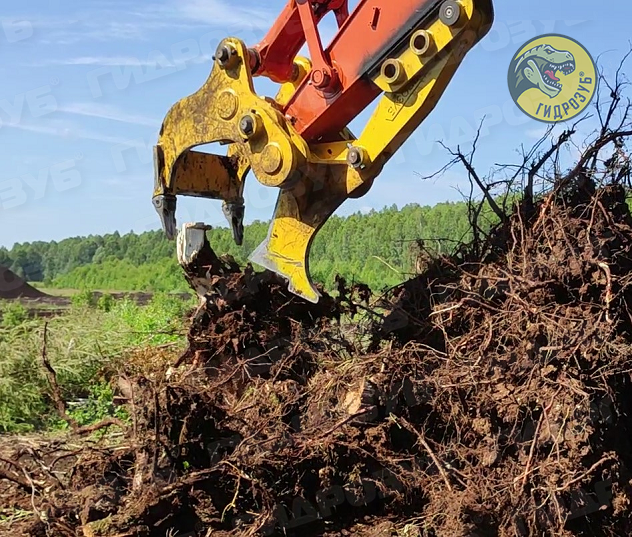 Delivery by any transport company..

The puller is designed to pull out the stumps with roots with the possibility of preserving the fertile layer. This equipment ensures good penetration into the ground around the stump and easy removal of the stump with roots, thanks to the teeth with interchangeable crowns. 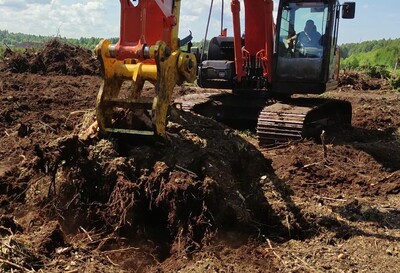 KP Series Stump Grinder is made of special wear-resistant steel for long life, with bottom and top knives to cut large stumps for easy uprooting as well as complete clearance of the stump from the ground. 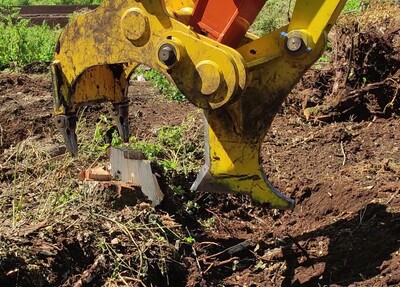 If you only have shrubs and young growth on an area that needs to be cleared, it is more effective to use the KG Series

Prices for grapplers on request, depending on the model and configuration of the order.

Get a price in 30 seconds

Stump grinders produced at our factory are designed to remove the stumps with root system and the subsequent crushing for further processing. Products are working on the basis of excavators weighing from 18 to 26 tons. The size of the opening of the jaws is 1150 millimeters, the width of the tool - 710 mm, the height of the tool - 1100 mm, the radius of capture - 986 mm. The mass of the mechanical puller " Gidrozub KP-20 " equals 1150 kg. It can vary depending on the variants of execution of the elements of the equipment, which are elaborated according to the technical task of the customer.

Gidrozub "KP-20" is made of special wear-resistant steel sheets. A set of its functional parts corresponds to the execution of similar products.

The mounted equipment consists of two jaws. They are jointed with each other. The upper jaw - mobile in all versions - has two teeth, and the lower jaw is formed by one tooth.

The working elements have a special geometry. The two teeth of the upper jaw have the same curvilinear profile. It is due to the specifics of their work and the need to place the lugs. Therefore, the contour of the teeth of the upper jaw includes an area with a hole for connection to the hydraulic cylinder rod of the excavator. These holes are reinforced with lugs on both sides.

The tines of the top grapple are secured to each other with a crosspiece and a spacer pin. There are technological elements for installing the latter. The teeth have special holes whose diameter corresponds to the size of the pin. The pin is inserted into these holes of the teeth, and the circumference of the joint is fixed with welded joints on both sides.

The forming element of the lower jaw is the tooth. It is made of wear-resistant steel of increased hardness, which allows working with the wood of the stump without installing an adapter with a crown. The functional element is the only one present in the assembly, but it is connected at once to two lugs on each side.

There are two holes in the tooth, but only one of them is part of the pivot joint, the second is designed for technological tasks to form another pivot joint.

The lower jaw is a nodal structure consisting of several parts. A pin is inserted into the technological hole of the tooth. It is fitted with two lugs on each end. Each of them is made with a hole, the size of which corresponds to the diameter of the finger. The lugs near the side faces of the tooth are additionally braced with ribs.

Elements of the hinge joint are set at a distance from each other. This is necessary for the passage between the lugs of the lower jaw of the lugs of the two teeth of the upper jaw with the subsequent movable (rotary) fixation. Such an implementation has its own purpose. A support made up of two lugs at once adds stiffness to the tine when the stump grubber is in operation. In addition, the load on the lower tooth is distributed over a larger number of elements.

We have come to a point where it is imperative to talk about the way in which the jaw or its drive unit is secured. This design aspect is inextricably linked to the attachment of the working parts to the excavator arm. As mentioned above, the jaws are hinged together. The movable connection is formed by two pairs of lugs of the lower jaw and two teeth of the upper jaw fixed between them through a finger. This design allows the product to be mounted on the base machine.

A distance is provided between the inner lugs of the lower jaw that takes into account the connecting size of the arm sleeve. This means that during attachment assembly, a single pivot joint secures three assemblies at once. The pin connects the top and bottom jaws to each other and to the tiller. Its diameter corresponds to the size of the standard component. Only the length of this pin is longer due to the thickness of the lugs and their reinforcing pads.

Having explained the method of mounting the tool on the excavator arm, let's turn to the implementation of the lower jaw attachment.

First, there is an opportunity to rotate the mandible to change the magnitude of the jaw opening. There are three pairs of holes in the stop for this purpose. By changing the position of the lever pin, you can rotate the lower jaw relative to the excavator arm pivot.

Second, you can implement a scheme with a hydraulic cylinder of the drive. If you change the lever to this hydraulic element, the lower jaw also becomes movable. Such a design solution slightly expands the working area in the process of gripping the stump and its root system.

The upper jaw of the mechanical grubber is also driven by a hydraulic cylinder. This is similar to the hydraulic version of the tool. However, this hydraulic cylinder belongs to the working equipment of the excavator and does not require a special frame for installation and an additional circuit for connection.

Otherwise, the operation has similar features. The operator moves the excavator to the stump and turns the platform to align the direction of the working equipment with the location of the stump. Next, it opens the jaws of the tool. The operator then lowers the arm and boom. When the stump is between the jaws of the uprooter, they close. Grabbing and retrieving takes place. When the stump is being moved, the soil either falls off the roots by itself or is shaken off by the movements of the excavator's operating equipment. A nearby place is allocated for temporary storage. Then carry out the removal of the stump wood and roots for further processing and use.

Products of the company "Gidrozub" perform not only removal. Usually in the process of removing the stump it is broken into several parts, but if this does not happen, then before storing the stump and its roots can be shredded by the rooter.

Sometimes a different removal option is used. If the condition of the stump does not allow for grappling, and its root system is sufficiently developed, then the additional capabilities of the rooter are used. In this case the upper jaw with its crowns loosens the soil and deepens into it. The excavator operator performs these manipulations by turning the arm. As a result, the stump is grabbed not by the top part, but by the root part. The actions can be repeated.

If the root system of the stump is strong, then make several movements with the stick together with the rotation of the excavator platform to loosen the soil around the stump. Then the jaws close and the stump or parts of it with roots are removed. If the second option is selected, the cycle continues until all fragments have been removed. The possibilities of the mechanical puller allow to do it.

The company "Gidrozub" produces this attachment according to the technical task of the customer, or company specialists offer one of the standard sizes of the product. The geometry of the individual elements of the design, the places of reinforcement and the material of the tool can be specified by the customer.

In conclusion of the article, I would like to say a few words about the functionality of hydraulic and mechanical versions of the excavator-based stump puller.

In relation to other types of attachments designed for similar purposes, these products have many working manipulations. This tool can remove a stump by grasping its top or encompassing its root system, followed by grasping the stump. In addition, these products can perform the chopping of stumps and their roots.

The equipment is characterized by an additional feature. By means of the upper jaw it is possible to loosen the ground near the stump, which allows to retrieve stumps with a strongly developed root system.

Hydraulic excavators have a slightly greater functionality in this regard due to the additional manipulations that increase the working area. But the cost of such products is also higher than that of mechanical modifications. In addition, the basic machine requires a hydraulic circuit of additional equipment for connecting a hydraulic cylinder of the moving jaw. The weight of such a product is higher than that of a mechanical modification with the same force.

The expediency of using the hydraulic puller on the excavator is determined by the complexity of access to the stump and its root system. In some cases, by expanding the number of manipulations, the productivity of the work may increase.

Usually in the operation of such attachments there are no additional factors limiting the working area. In such realities, it is advisable to use a mechanical rooter based on an excavator, for example, "Gidrozub KP-20". It is distinguished by its optimal price, design reliability, unpretentiousness in work, the lack of need for an excavator hydraulic circuit of additional equipment.

The tool can perform uprooting and grinding of stumps with a decent level of performance. The product is made of sheets of special wear-resistant steel. The diameters of the pins of the articulated joints of the " Gidrozub" attachment are made considering the dimensions of the drawbar eyelets and the handle of a particular excavator model.